The Best Of Times, The Worst Of Times appeared in the British newspaper The Independent on Mondays, from 1989 to 1991.  Interviewed by Danny Danziger, the subjects recounted a high or low point in their lives. A number of prints are in the collection of The National Portrait Gallery, London.

Sir George Martin  (1926 - 2016) was an English record producer, arranger, composer, conductor, audio engineer and musician. In reference to his extensive involvement on each of The Beatles' original albums, Paul McCartney said upon his death, "If anyone earned the title of the fifth Beatle, it was George". He is considered one of the greatest record producers of all time.
Photographed in London, 1990

Harry Thompson (1960 – 2005) was an English radio and television producer, comedy writer, novelist and biographer. For five years, he was producer of  BBC TV's "Have I Got News For You", "They Think It's All Over' and Never Mind The Buzzcocks". Thompson (Obituary, The Guardian) was widely regarded as one of the most successful television producers and comedy writers of his generation.  He died on November 7, 2005.
Photographed in the gardens at Soho Square, London, 1991.  National Portrait Gallery, London

Susan Howatch (b. 1940) is an English author. Her books have included The Starbridge Series and The St. Benet's Trilogy.
Photographed in 1991

Russell Twisk  (1941- 2013) was a journalist & editor of The Listener (BBC) and Reader's Digest.
Photographed in 1991 National Portrait Gallery, London

Monica Connell is a writer and photographer,  author of Against a Peacock Sky .
Photographed at her home, 1991

Miriam Margolyes (b. 1941) is a British-Australian actress and voice artist. Her earliest roles were in theatre and after several supporting roles in film and television she won a BAFTA Award for her role in The Age of Innocence (1993) and went on to take the role of Professor Sprout in the Harry Potter film series.
Photographed at her home, 1990

John Sessions (b. 1953) is a Scottish actor and comedian. He is known for comedy improvisation in television shows such as Whose Line Is It Anyway?, as a panellist on QI, and as a character actor in numerous films, both in the UK and in Hollywood.
Photographed at his home, 1991

Pamella Bordes is an Indian-born photographer and former Miss India who briefly hit the headlines in the United Kingdom in 1988 and 1989 as the mistress and escort of several notable individuals, including arms dealer Adnan Khashoggi. She had been known in society columns as a social companion of Andrew Neil, editor of Sunday Times; Donald Trelford, editor of The Observer and of junior minister Colin Moynihan.
Photographed in London, 1990

Sir Jonathon Porritt, (b. 1950) is an environmentalist and writer, known for his advocacy of the Green Party.
Photographed at his home, 1990

William Douglas Home (1912 – 1992) was a British dramatist and politician, author of 50 plays, most of them comedies in an upper class setting.  In 1944, whilst on military service as an officer, Douglas-Home was charged at a Field General Court Martial for disobeying orders during a German attack on Le Harve. He argued he had acted on humanitarian grounds, but was convicted and sent to prison, serving eight months. His eldest brother was Sir Alec Douglas-Home, Prime Minister from 1963 to 1964.
Photographed at his home in Hampshire, 1990

Celebrity chef Marco Pierre White (b. 1961) was, at the time, the youngest chef ever to have been awarded three Michelin stars. He has trained chefs such as Gordon Ramsay and Curtis Stone.
Photographed at Harvey's, his restaurant in Wandsworth, London, 1991 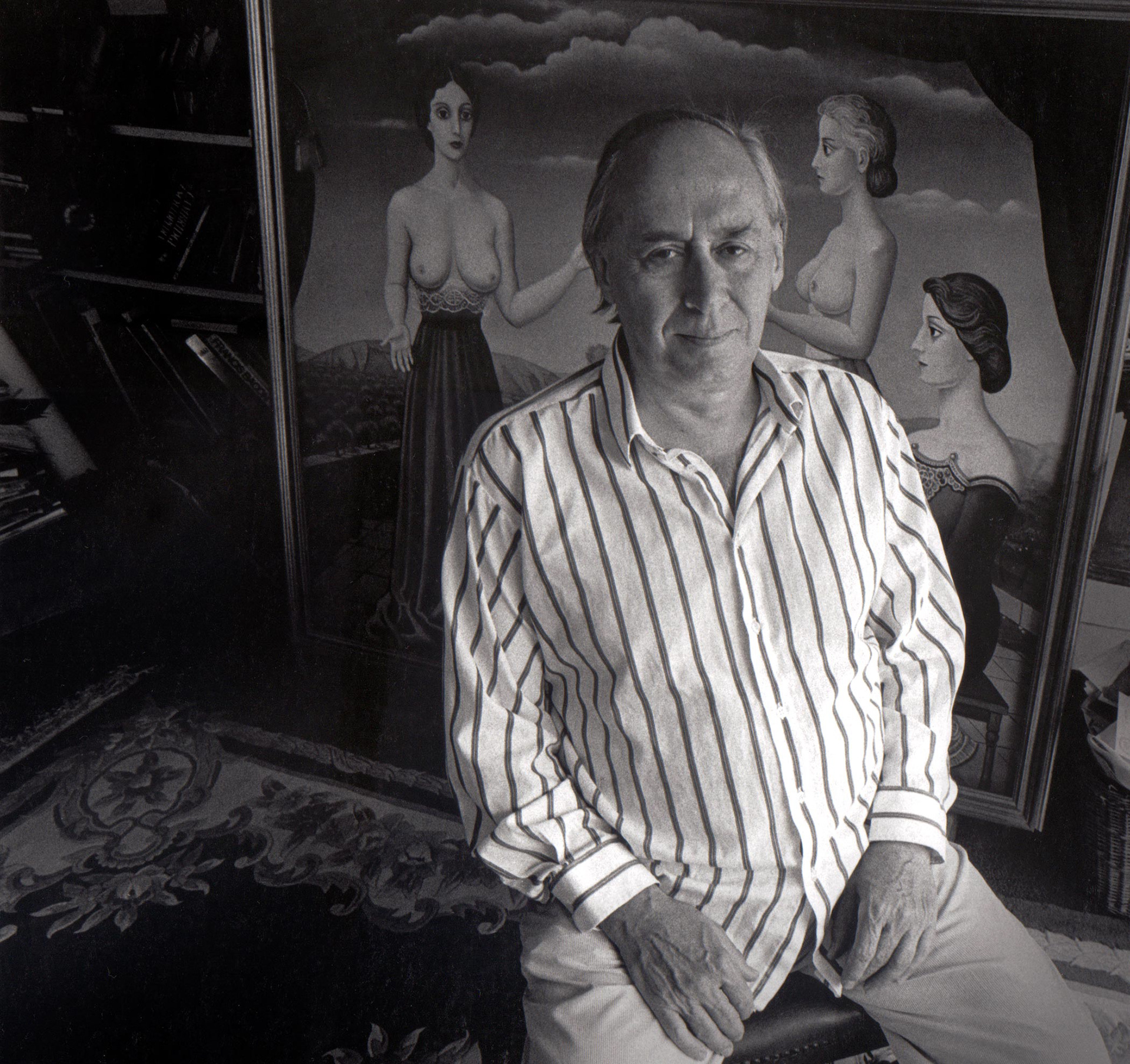 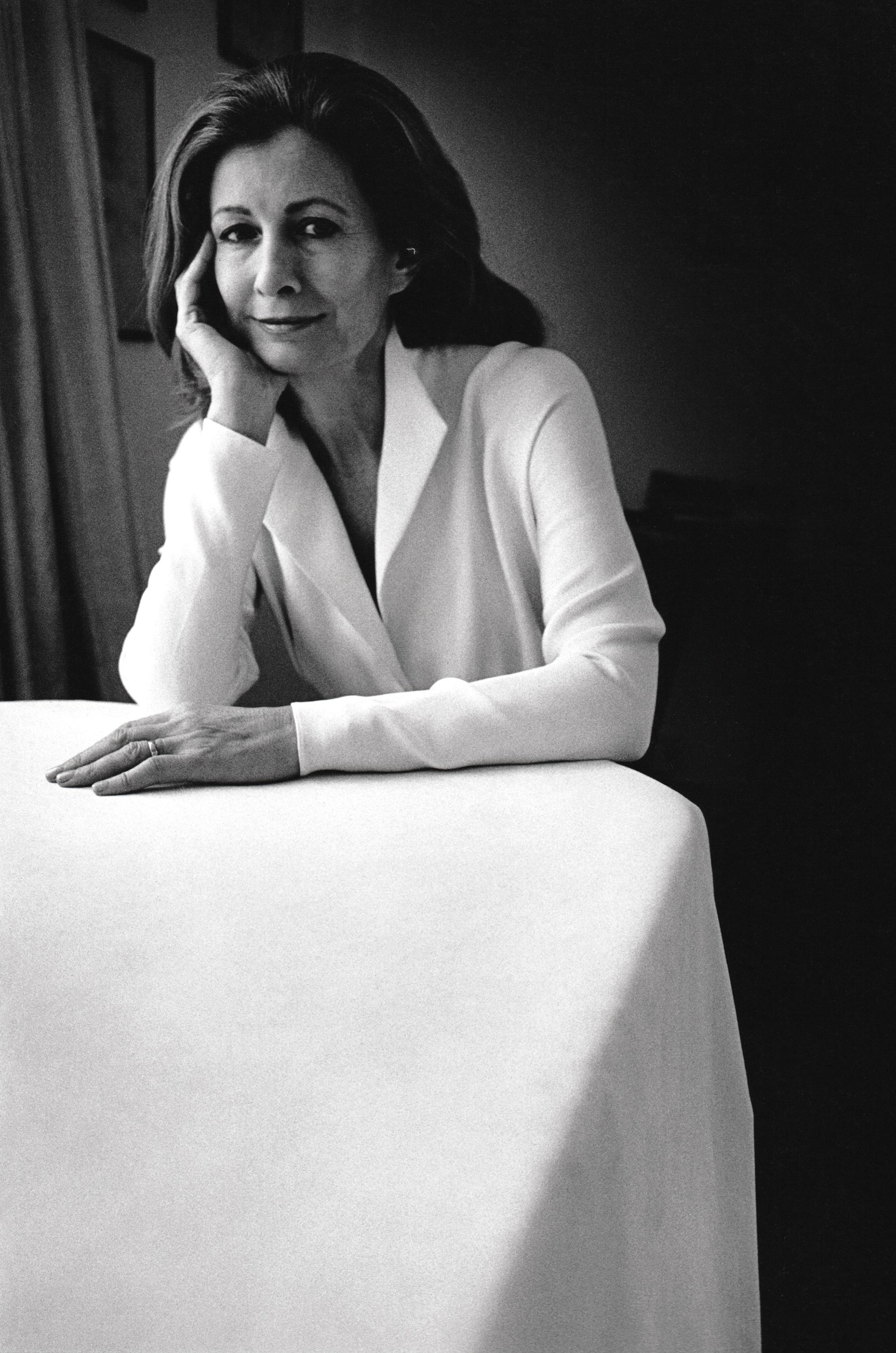 (Left) J. G. Ballard (1930 – 2009) was a novelist, short story writer, and prominent member of the New Wave movement in science fiction. His best-known books are Crash (1973), adapted into a film by David Cronenberg, and the semi-autobiographical Empire of the Sun (1984), made into a film by Steven Spielberg. Photographed at his home in west London, which was filled with copies of his favourite paintings, many of them from the surrealist movement.
Photographed at his home, 1991
(Right) Kathleen Tynan (1937 – 1995) was a Canadian-British journalist, author, and screenwriter, once married to theatre critic Kenneth Tynan. Following his death in 1980, she wrote the biography The Life of Kenneth Tynan (1987), her best-known book.
Photographed at her home, 1990

Anton Mosimann (b. 1947) has presented television programmes in the UK and Switzerland. In 2016 a museum dedicated to his life and culinary arts was opened in the César Ritz Colleges, located on the shores of Lake Geneva (lac Léman), in the town of Le Bouveret.
Photographed at his restaurant, 1991 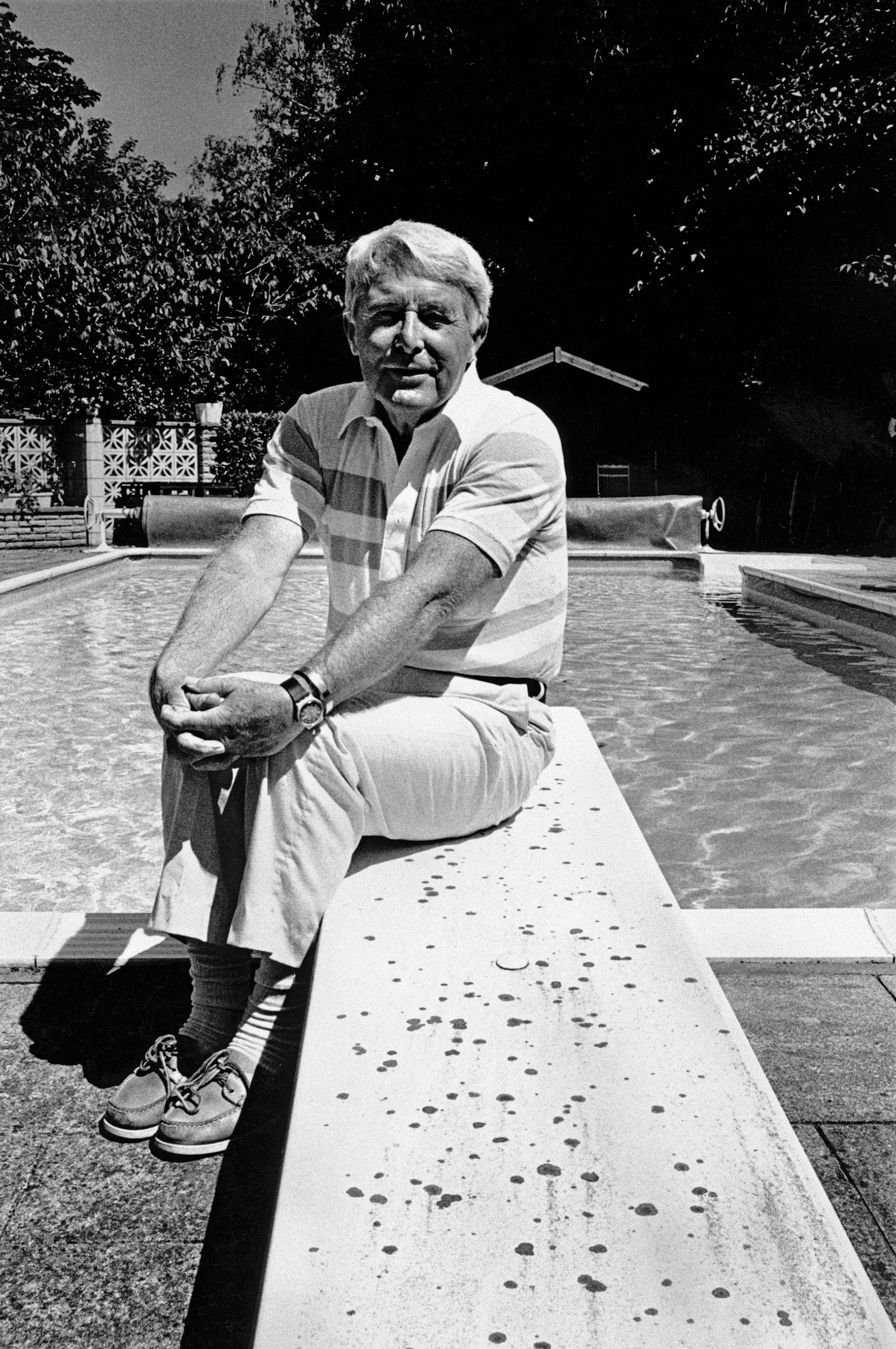 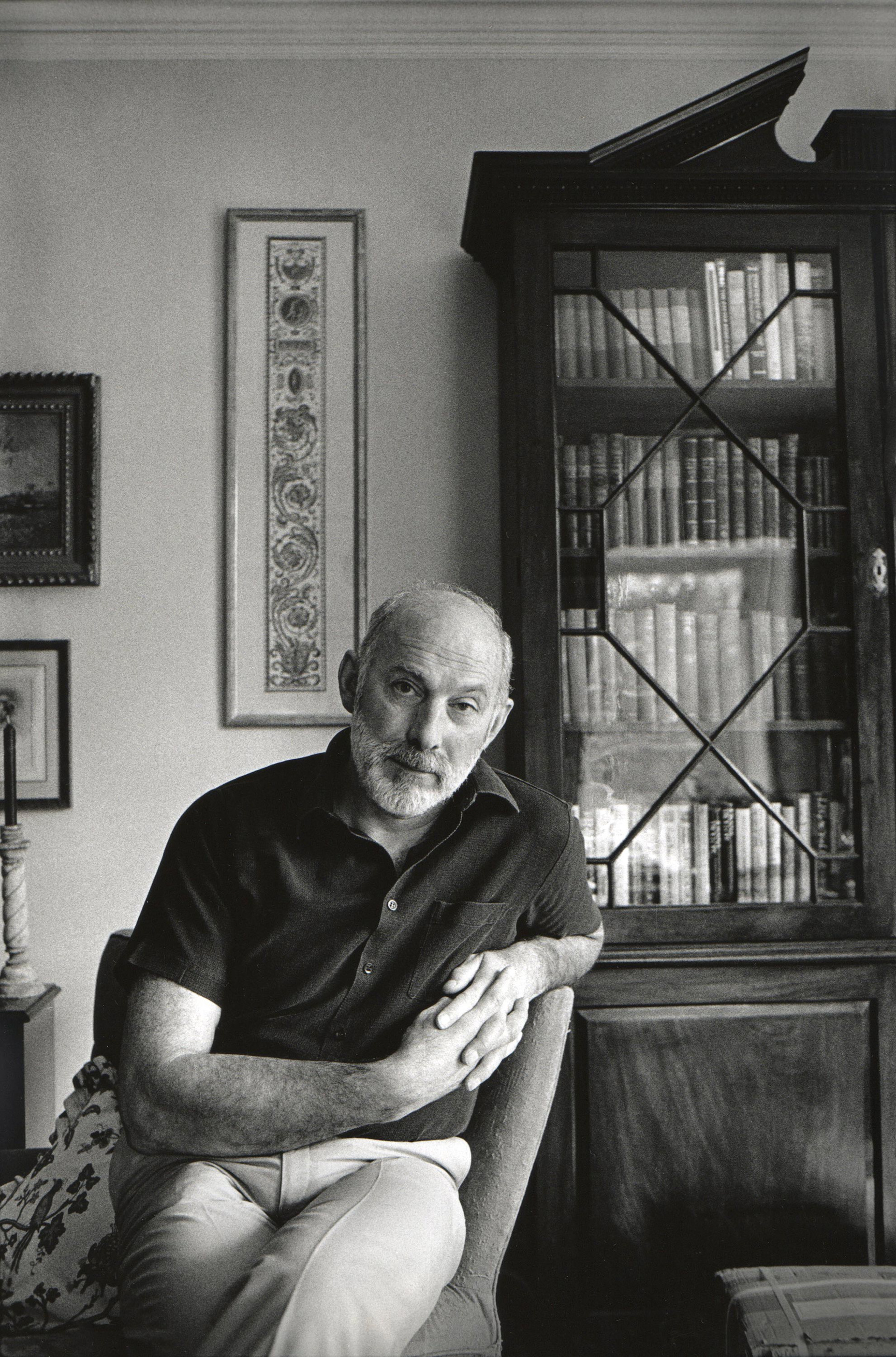 (Left) Ernie Wise OBE (1925 – 1999),  was a comedian, best known as one half of the comedy duo Morecambe and Wise, who became an institution on British television, especially for their Christmas specials.
Photographed at his home, 1990
(Right) Ian Curteis (b. 1935) is a British dramatist and former television director, known for
The Falklands Play, originally scheduled for production in 1985, which was eventually broadcast in 2002. At the time production was cancelled, Curteis blamed a "liberal conspiracy" at the BBC.  One of his three marriages was to the novelist Joanna Trollope.
Photographed at his home, 1990

Barry Fantoni (b. 1940) is a writer, comic strip cartoonist and jazz musician, most famous for his work with the magazine Private Eye, where he is the writer of poems under the name E. J. Thribb.
Photographed in London, 1990 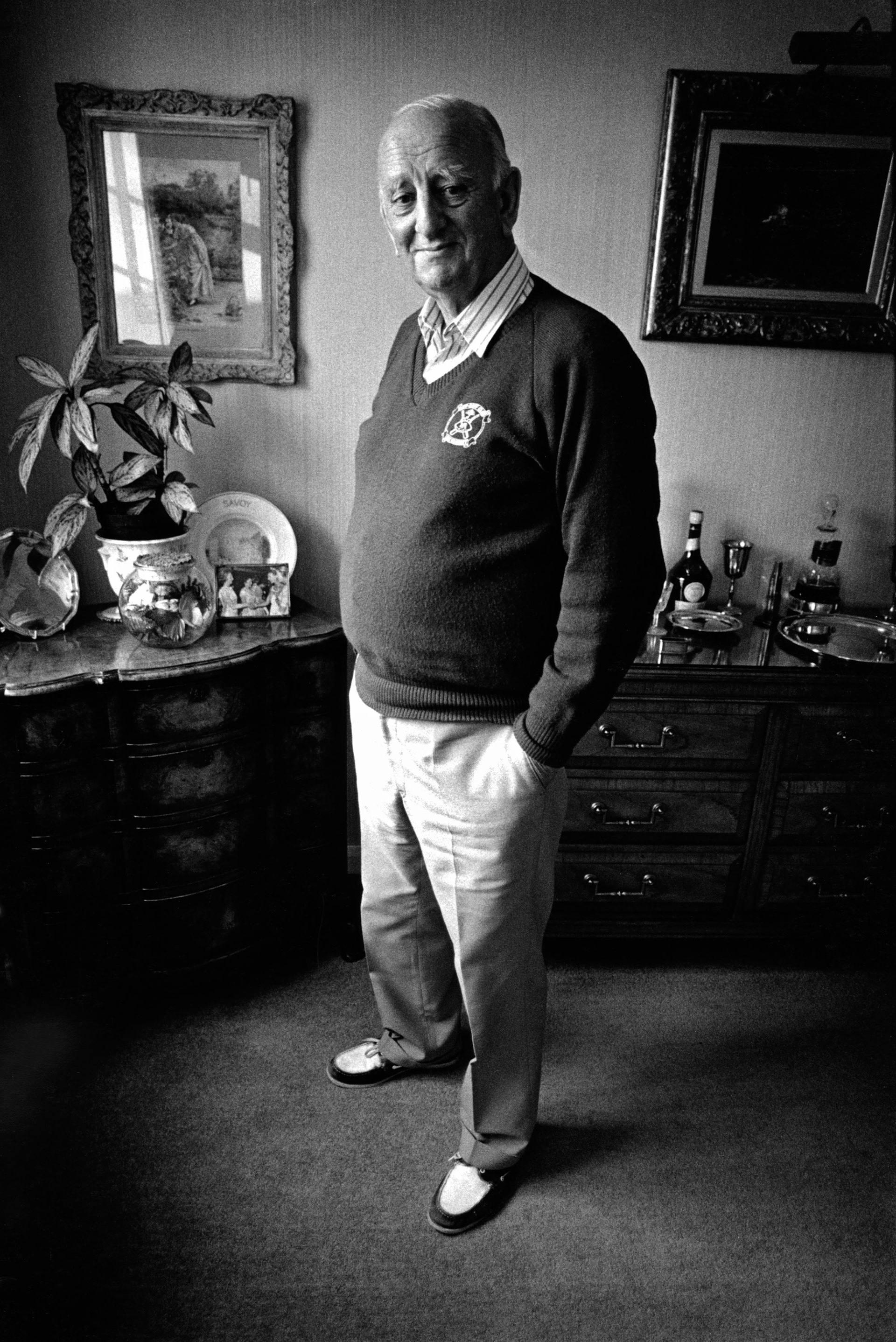 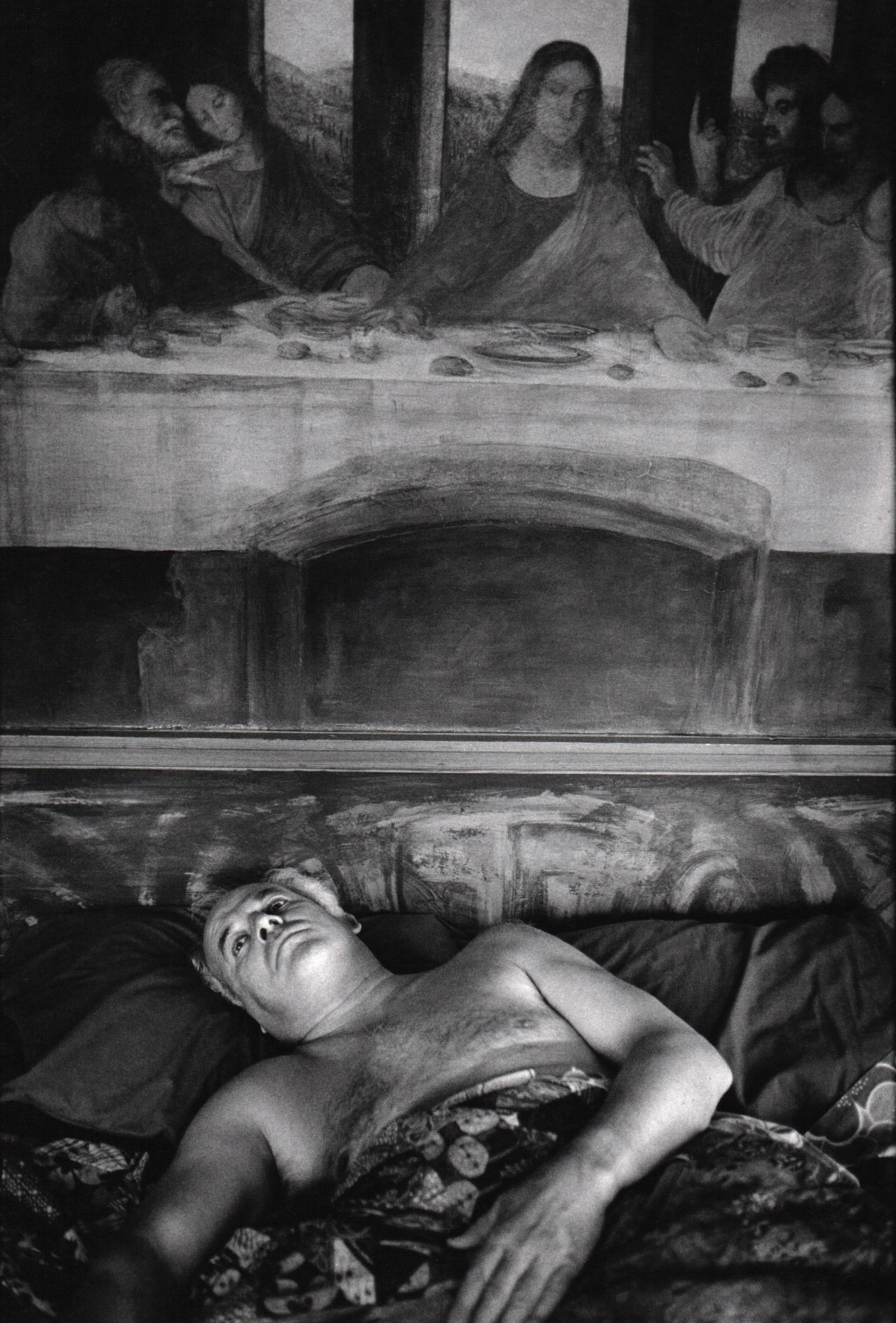 (Left) Brian Johnston (1912 – 1994) was a cricket commentator and presenter for the BBC.
Photographed at his home, 1991
(Right) Ralph Steadman (b. 1936) is a satirical cartoonist best known for his work with American author Hunter S. Thompson. At the photo session he suggested a shot showing off the copy of Leonardo's The Last Supper he had painted onto his bedroom wall (above). Steadman worked for Punch, Private Eye, The Daily Telegraph, The New York Times The New Statesman and Rolling Stone.
Photographed at his home, 1991
↑Back to Top